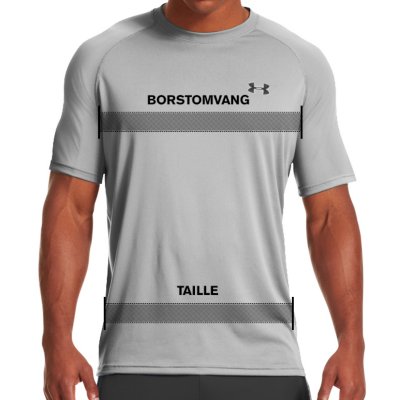 Bring back the original material and design!!!

Ive been using these as undershirts at work under a uniform and body armor for a decade or more. The new material they have released the last few years is sub par. Its much thinner and abrasive, also doesnt compress like the shirts of old. I still have some of the originals that ive used for 7+ years on duty and they are still alive, much thicker ans slicker which is much better. Please bring them back!!!!!!!!

This product has bad features

The newer compression shirts that have visible seams around the shoulder pucker up and look terrible Stay away from these if you care how they look!

Great shirt, but too tight, and too scratchy

Maybe it's just me, but it's just uncomfortable to wear. It makes me itchy. [This review was collected as part of a promotion.]

I have a bunch of UA compression shirts from many years back. That's a testament to the quality. I recently ordered two of these HeatGear compression shirts and was disappointed. The fit was good, but it seems like the material has changed. The old ones were silky smooth and felt like a second skin. The new ones were more rough and felt abrasive when I tried them on. I returned them.

I've worn Under Armour compression heat gear shirts for about the last 10 years as undershirts at the gym, and as rash guards for Jiu-Jitsu. They have always had a solid feel to them and actually "compressed" or fit very tight. It was time to buy some new ones and I almost threw out all my old shirts to purge and buy the newest version currently on the site, but luckily I only bought two. The new material can only be described as almost sheer in comparison to the old and honestly kind of cheap. The fit is still snug to your body, but the material lacks any of the density or actual compression of the previous versions. I'd always bought only Under Armour brand because you could always feel the difference, but with these new versions they've dropped below the quality of many knock offs that I've seen. Hopefully they change it and go back because I love the brand and these shirts.

Little or No Compression

There seems to be a common thread running through no only thes shirts, but as I was looking to replace some older UA Compression shirts. There really isn't much compression in the compression lines. For a while I had to get away from UA Compression due to the fact that they didn't really work out that well with some back braces for an old Vietnam injury, but as I had the possibility of foregoing those braces I went back to a couple of older compression shirts. I had just planned on getting a couple of these on sale while I decided what I needed, but I have to say that while these are decent, they are of lesser quality, and durability. I had thought of exchanging them for one size smaller, but that wouldn't work, what I gained from the "extra compression" would be offset by what I lost trying to squeeze my shoulders into space where the compression would only be trying to crush or cut into the skeletal structure. I ordered some additional similar lines of shirts thinking that these may have been a discontinued line for just that reason. In the meantime. Perhaps I would have been better off waiting on that next order. I can't say that these are "Bad" shirts, they are not, it is just that when going head to head with older shirts that had been washed and worn, stressed and stretched, the older ones were better than the new ones, notwithstanding the fact that the new ones had only been washed one time. Only time will tell about the other shirts.